In a bid to make a bigger impact on Fairtrade sports ball production Bala Sport is hoping to raise up to £150,000 to promote production at Fairtrade certified factories in Pakistan.
Based in Glasgow, the community benefit sociiety was established last year with the aid of a near £20,000 grant from the Co-operative Glasgow Business Development Fund run by the City Council.

During Fairtrade Fortnight we went public with our community share offer hoping that Fairtrade supporters and other ethically minded investors will pitch in to help get a fair deal for the workers who produce the balls in Sialkot in the Punjab.

The Share Offer was launched on 24th Feb at an event at Scotland’s national Stadium Hampden Park in Glasgow. Scottish professional freestyle footballer, David Mennie was on hand to show off the Bala football range and pass on his freestyle skills to pupils from nearby Mount Florida Primary School for photographers.

David Mennie was on hand to show off the Bala football range and pass on his freestyle skills to pupils from nearby Mount Florida Primary School for photographers. 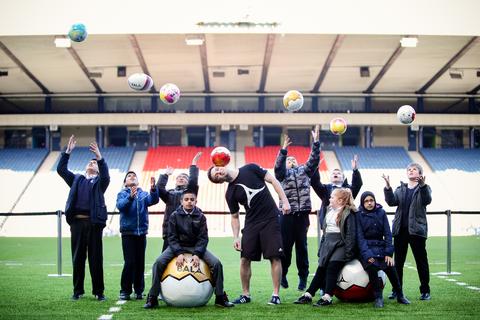 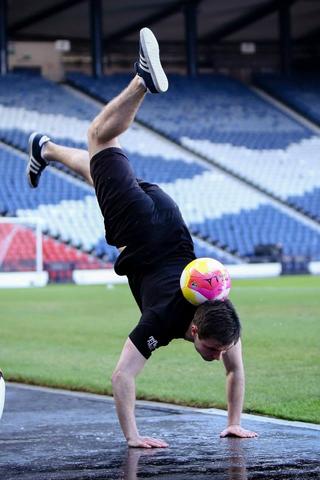 “Most people think it’s only farmed products that are Fairtrade, but labour in factories and hand-stitching centres can be certified too. Fairtrade guarantees fair rates of pay and safe working conditions as well as an extra 10% cash premium which goes towards projects such as free healthcare, education, and water purification.” 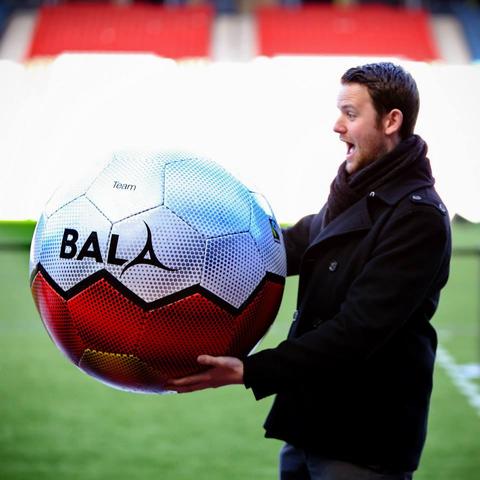 Bala Sport is hoping to sell at least 20,000 footballs, rugby balls and futsals (for indoor football) this year, with netballs and volleyballs due to be added to the range in 2016.

“Fair trade can make an enormous difference to the lives of those who produce fair trade goods – small changes in our spending habits can lead to huge changes in the lives of some of the world’s poorest people.

“Bala Sport’s fair trade footballs are a great quality product that are not only good for your next kick about but ensure those who make them earn a fair wage and work in suitable conditions. I would encourage as many people as possible to buy fair trade products whenever possible.”
Martin Meteyard, Chair of Bala Sport said:

“This is a great opportunity for individuals and organisations to help change the world. Fairtrade really does make a difference. You can invest as little as £50, up to a maximum of £25,000, to become a member, and we are hoping that HMRC will allow you to set 50% of the cost of your shares against tax under the government’s Seed Enterprise Investment Scheme.

Bala Fairtrade balls are high quality, made to the same specifications as FIFA Approved, FIFA Inspected and International Matchball Standard (IMS) balls. They are manufactured in Sialkot, Pakistan.

There are three football types in the range: a Pro match ball and a Team training ball (both hand stitched) and a Play leisure ball (machine stitched). These are available in adult and children’s sizes. The rugby balls range will be unveiled at the launch event, again a Pro, team and play spec of ball.

The Bala balls carry the distinctive FAIRTRADE Mark. Nine out of 10 UK consumers trust the FAIRTRADE Mark (Globescan) and 97% of UK teens recognise the Mark (Fairtrade Foundation).
The Bala branding has been developed by Glasgow design agency Reflex Blue. The word Bala is Gaelic for ball, and the final ‘A’ is a modern twist on a Gaelic symbol meaning human development (our answer to the swoosh!). Bala also means strength in Punjabi – the language spoken by the ball stitchers.