At Bala Sport we’ve been excited about the Homeless World Cup for months. Why? Well apart from being an awesome event which brings attention to the plight of homeless people throughout the world, because it represents a historic moment for the Fairtrade movement.

The 2016 Homeless World Cup, held in Glasgow will be the first international soccer tournament to be played with Fairtrade balls. And I can’t help being just a wee bit chuffed that it’s our Bala Fairtrade balls, designed here in the city the event is taking place in.

I’m also very excited that for the second year in a row The Open  golf championship will feature Fairtrade refreshments and bananas, but more on that later.

I met up with Homeless World Cup Co-Founder, Mel Young in Glasgow’s George Square (the venue for the event, right slap bang in the middle of the city) last week. We were imagining what the tournament will be like when the square is transformed with 3 football courts (that’s what they’re called), grandstand seating for 3,500 people and expected crowds over the week of 100,000 people for the free event. 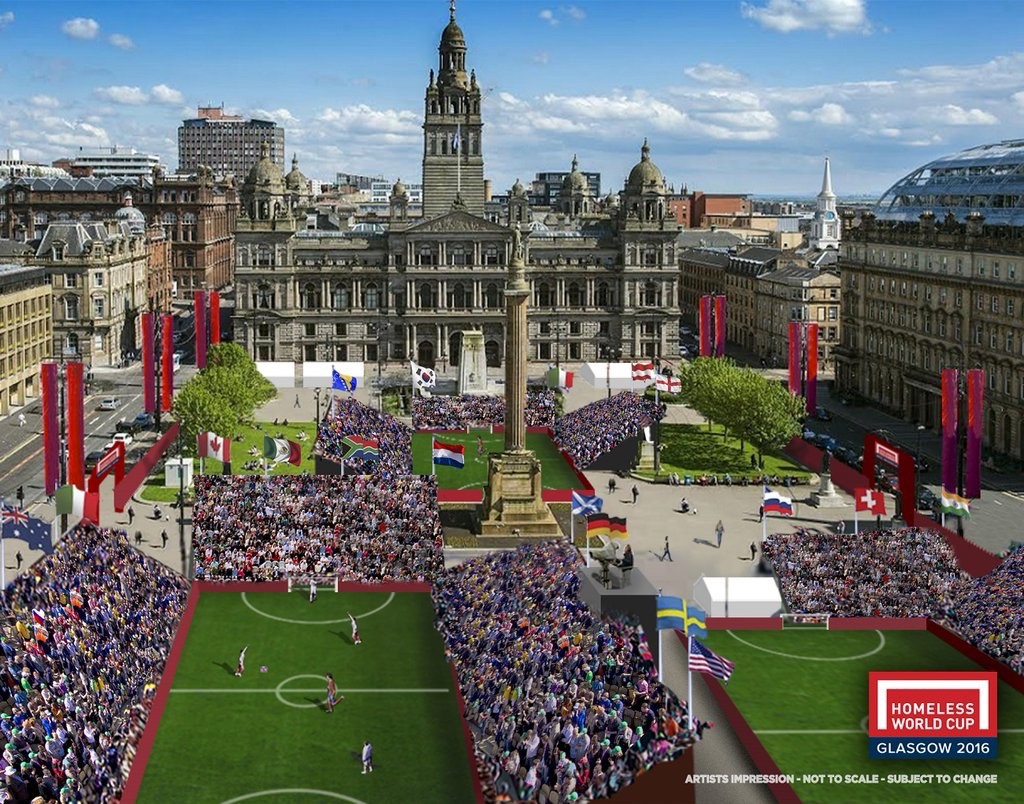 Hard to imagine a Glasgow sky this blue, but otherwise this artist impression shows how the venue will look.

Around 300 volunteers have been enlisted to help the event go smoothly, and rather spookily when I was showing Mel the special HWC16 Bala Fairtrade match ball we bumped into one of the volunteers who will be responsible for ensuring the balls are on court. 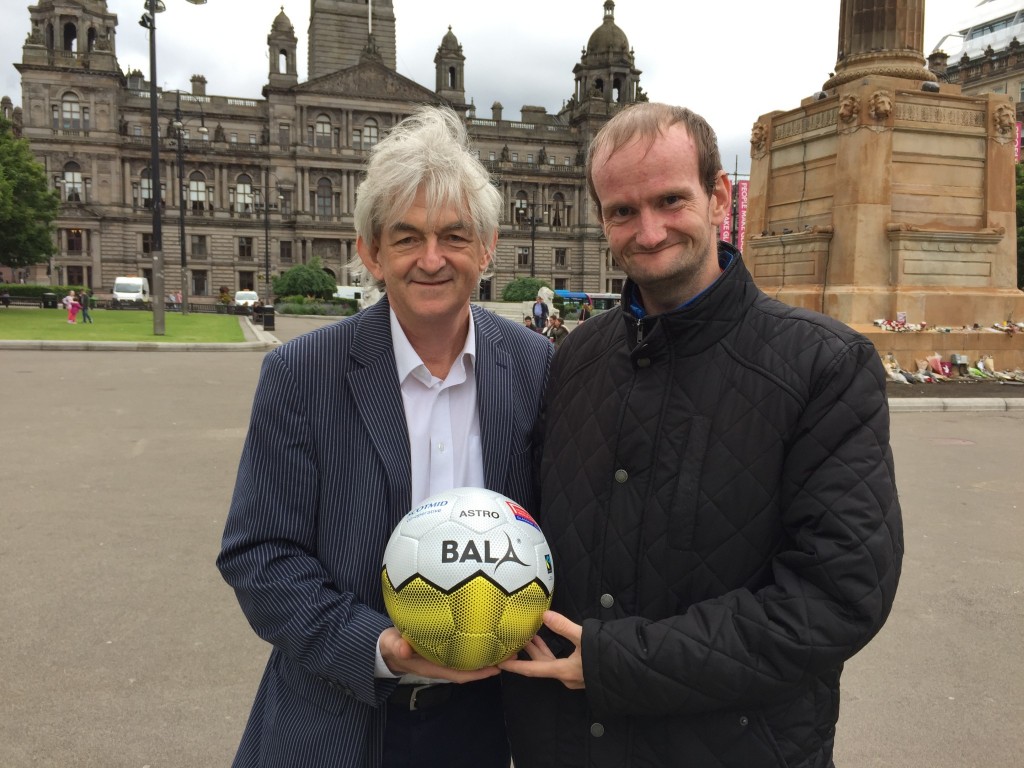 Homeless World Cup Founder Mel Young meets an event volunteer at the venue for the 2016 event, George Square in Glasgow.

When Mel gives his inspirational talks he often starts by saying how a ball can change lives. And Fairtrade balls do so too for sure, so again Fairtrade balls and HWC are the perfect match.

Here’s what Mel had to say about the ball and why he was keen for the tournament to be played with Fairtrade balls.

The Homeless World Cup match balls are a special edition of the Bala Astro ball which was developed especially for the tournament in consultation with David Duke, CEO of Street Soccer Scotland and his team. 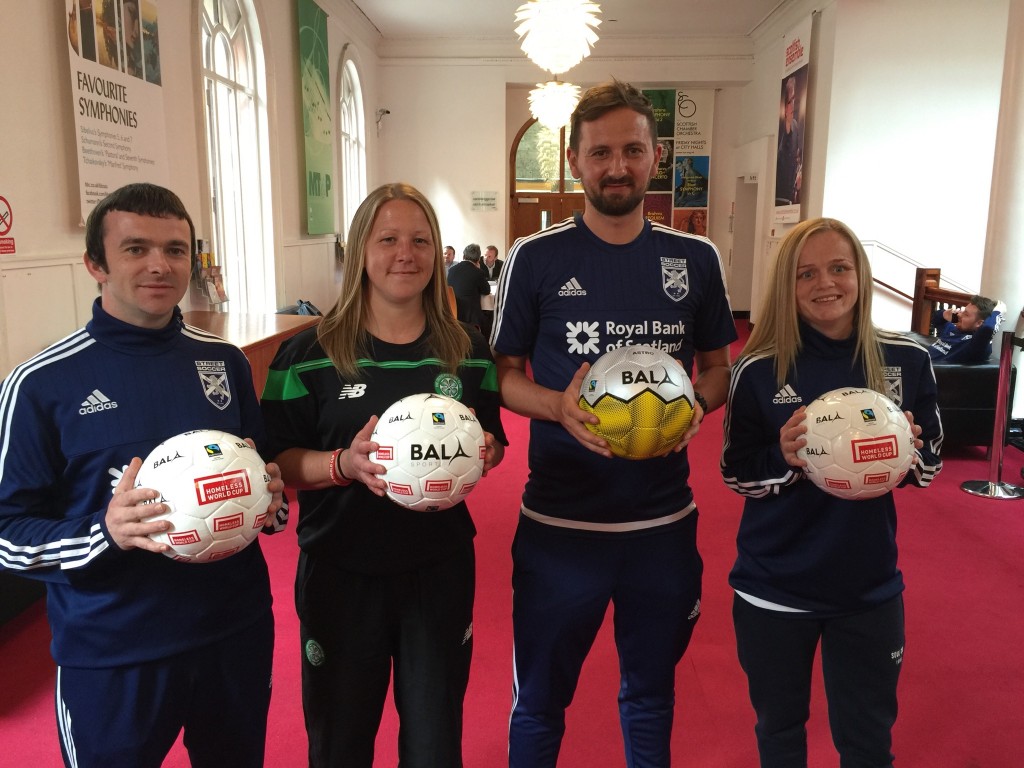 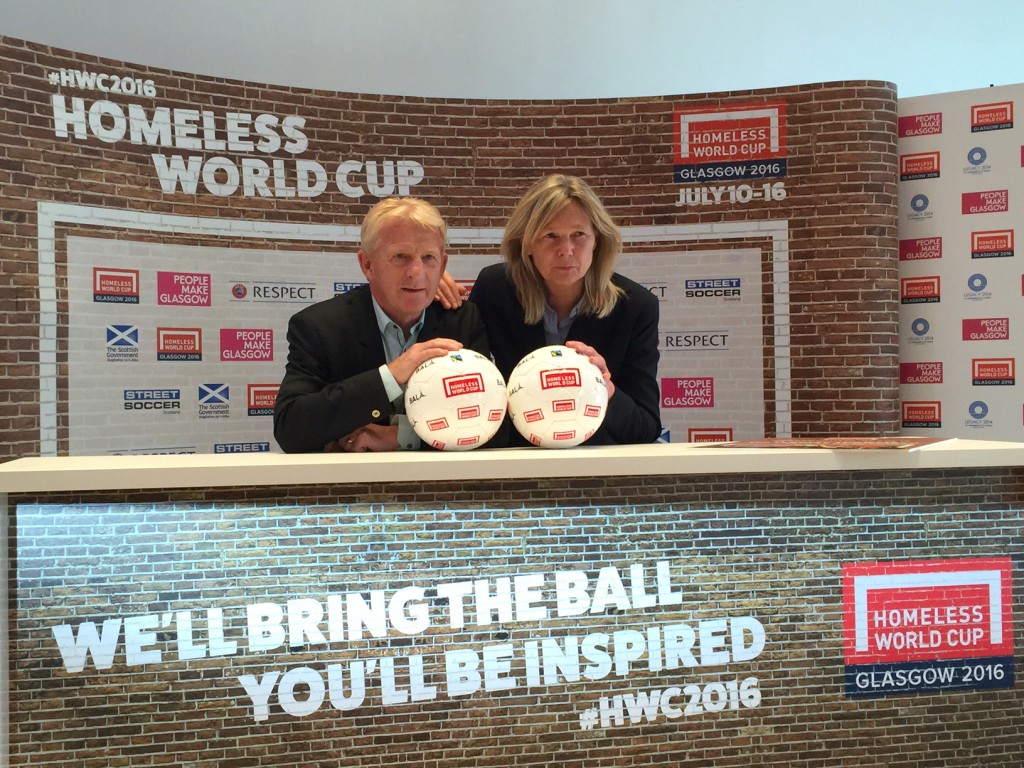 At the draw for the tournament Scotland men’s team and women’s team managers, Gordon Strachan and Anna Signeul were on hand to promote the event. Mr Strachan said the Astro was a good looking ball! 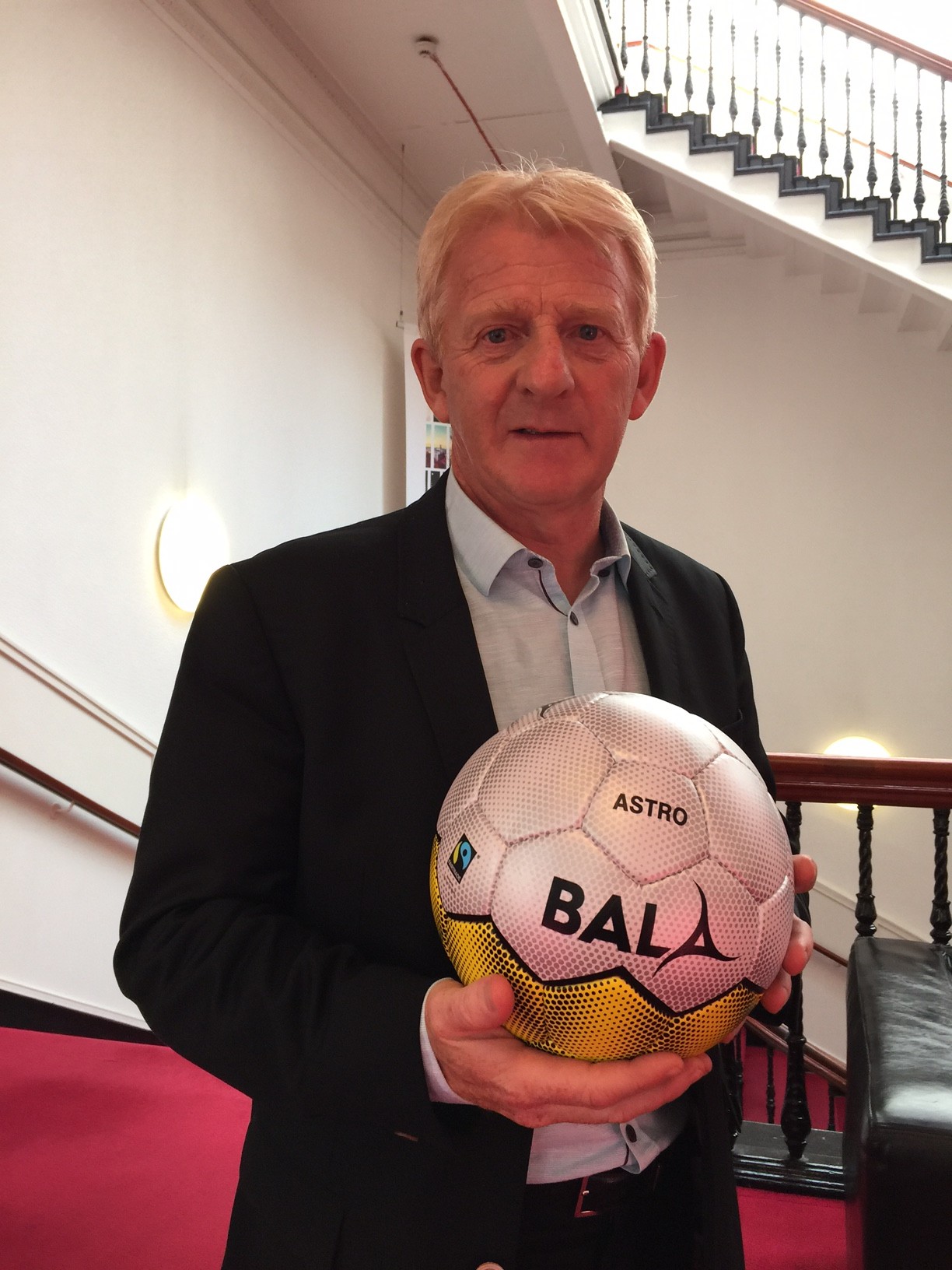 This event isn’t just the perfect fit for the tournament and for Bala Sport but also for our co-sponsor of the match balls, fellow co-operative, Scotmid. We wouldn’t have been able to raise awareness of Fairtrade footballs at the Homeless World Cup without them. Rather than just have a stall with leaflets we’ll be spreading the word and engaging football fans with our footy speed cage. That’s a big inflatable goal with a radar sensor that flashed up the speed of your kick when shoot a Bala Astro into goal. The speed cage is being operated on our behalf by our good friends at St Mirren FC Street Stuff and Renfrewshire Council – thanks very much guys.

So if you’re in Glasgow between the 10th and the 6th July, get down to George Sq and take in some inspiring football from the 64 teams from around the world, and see how fast you can strike these special Fairtrade balls. And if you like the feel of the ball they’ll be o sale at the event alongside a cheaper replica version. But if you can’t wait, or aren’t in Glasgow grab one now as they’re sure to sell out.

Scotland is synonymous with golf, and last year’s Open golf championsip being held in the home of golf, St Andrews. This was the first time The Open was a Fairtrade event in terms of the core hot beverages, sugar and bananas provided. This was possible thanks to the excellent work of the St Andrews Fair Trade Group and the Scottish Fair Trade Forum. Now for the second year in a row the event is being held in the Fair Trade Nation of Scotland, at Royal Troon. The Troon Fair Trade Initiative have continued the good work and the Royal and Ancient have adopted their Trading Fair policy. 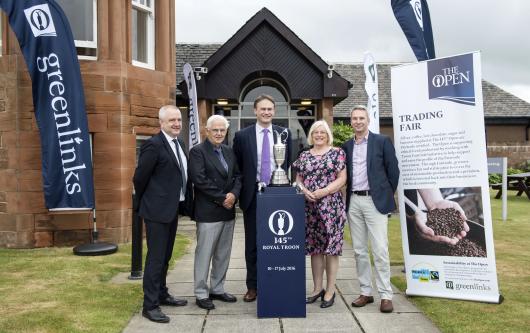 Martin Rhodes (the Scottish Fair Trade Forum) and Angus Coull (Bala Sport) alongside David and Val Gwynne from Troon Fairtrade Initiative, stand with Johnnie Cole-Hamilton, The R&A’s Executive Director of Championships, and the Claret Jug beside a banner describing how The Open is using Fairtrade products in Troon.

It’s great to see the Royal & Ancient ensure that all tea, coffee, coffee, hot choc, sugar and bananas at The Open are Fairtrade. There aren’t any Fairtrade Standards for golf balls yet, but Bala Sport is working to try to change this. So, with that in mind I couldn’t help myself I had to test the ground and ask R&A Sustainability Leader, Phillip Russell what he thought the prospects would be, after he told me about the great Fairtrade food efforts.

Sorry Phillip for putting you on the spot there. If you’d like to see the Fairtrade Standards for sports balls changed to include golf balls, please let us know. And maybe The Open will be the next international sports event to use Fairtrade balls – and Bala Sport will be delighted to provide them.

One day too the Euros might see the light and use Fairtrade match balls. In the meantime hold that thought and grab one of the last remaining special limited edition Bala Fairtrade Euros Flag balls for just £15. 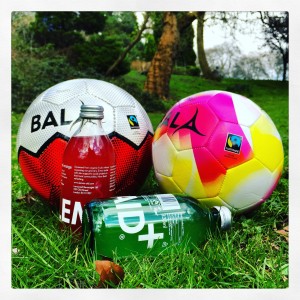 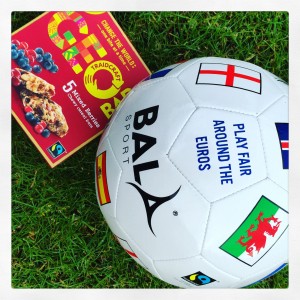 Even after the Euros and the Homeless World Cup are over there will still be plenty of summer left to play you’re own games, score your own Euros goals and be a football hero in your own lunchtime with the range of Bala Fairtrade footballs. Replenish some energy with a snack from some of our Fairtrade friends like Geo Bar and LemonAid and ChariTea. Enjoy! Oh and you can grab a chance to win a Bala Euros ball with Geo Bar too.

Oh and – anyone for tennis? New balls please – Fairtrade ones!