In a move which speaks volumes about the supporter-owned football club’s co-operative values and ethos, FC United of Manchester is using Fairtrade footballs from a community co-op as it officially opens its new Broadhurst Park ground in Moston with a showpiece match against Benfica on Friday 29 May. 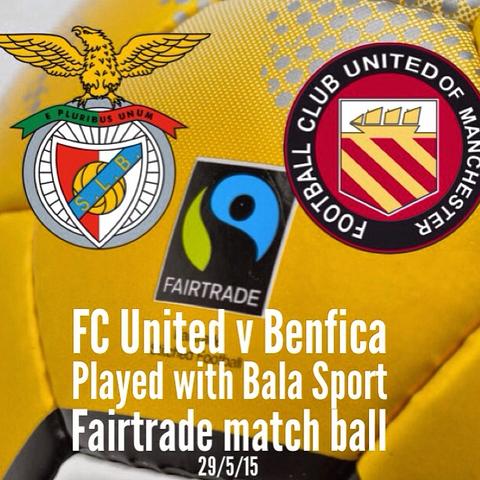 The two teams will be using Fairtrade footballs supplied by Bala Sport. The company was formed under the same principles as FC United, as a democratically-run, community benefit society. Joint managing director of Bala Sport, Angus Coull said: “Through Fairtrade our aim is to ensure fair pay and safe working conditions for the factory workers who make our hand-stitched balls in Pakistan. We are delighted to be providing our top-range Bala Pro match ball for this exciting game between FC United and Benfica.

“Because the balls carry the Fairtrade mark the makers benefit from the extra 10 per cent Fairtrade premium we pay them. Through a democratic decision-making process this cash fund is typically used to provide things like free healthcare for workers and scholarships for their kids, even water purification plants not just for workers but for the benefit of the whole community.”

FC United general manager Andy Walsh said: “We are delighted to be using footballs which are ethically sourced and produced. The balls being used by FC United and Benfica are made and tested to the same specifications as FIFA Approved balls and are also competitively priced. So, whichever team triumphs in Friday’s match, it’s set to be a win-win situation for the men and women who make the balls in Pakistan. And that’s got to be a good thing.”

Glasgow-based Bala Sport currently produces a range of three footballs. The balls are designed in Scotland and made in Sialkot in the Punjab where around 70% of the world’s hand stitched balls are made. There are currently only six Fairtrade certified factories in the world – all are in Sialkot. The factories are currently only producing around 8% of their output under Fairtrade terms. BalaSport’s aim is to create a large increase in demand so that the workers and their families have a more secure future. Currently less than a quarter of 1% of sports balls sold in the UK are Fairtrade.